Reflections on Digital Games as a Medium for Education: Results from a Qualitative Study.

The use of digital game potential for education has been investigated extensively. However, little is known about how players themselves perceive educational possibilities of the entertainment games they play in their free time. This knowledge gap is problematic because players’ own assumptions about learning with digital games will influence the acceptance and the outcome of any game-related educational intervention. Based on a qualitative content analysis of interviews with 19 adolescent and young adult players of five simulation games (Age of Empires, Cities Skylines, Civilization 6, Eco, and Tropico 6), this study investigates how players perceive digital entertainment games as a medium for (geography) education. While a few interviewees dismiss the potential of digital (entertainment) games, predominantly based on the games’ contents instead of medial particularities, others embrace the educational possibilities of the medium wholeheartedly, based on its attractiveness and unique characteristics, including didactical features. A third group of respondents provided mixed reviews of (entertainment) games’ educational potential by referring to advantages and disadvantages of the medium’s characteristics, as well as the challenges of a simplified and/or inaccurate representation of content. Interviewees from all three groups underestimated the value of digital games for (geography) education beyond subject matter expertise. By solely framing (geography) education as the transfer of correct and politically neutral specialized knowledge, they failed to recognize games’ possibilities in terms of achieving additional learning goals of contemporary (geography) education, such as critical reflection skills, argumentation skills, and the formation of opinion. Overall, many players rightly assume that a successful implementation into the geography classroom strongly depends on context variables, such as the selected game, target group, learning goals, and pedagogical concept. Above all, they stress the importance of briefing and debriefing by an educator. Finally, the players’ levels of reflection and depth of argumentation variedsignificantly – presumably depending on their age, educational level, and the games they refer to.

Games Versus Reality? How Game Designers Deal with Current Topics of Geography Education

Digital entertainment games frequently address current societal issues that are also dealt with in geography education, such as climate change or sustainable city development, and give various opportunities for learning. However, in order to be fully able to determine the games’ educational potential and to instruct meaningful reflection on them in class, the designers’ approaches to realism regarding these topics need to be understood. Therefore, we have developed a model of realism in games and conducted 9 interviews with 10 experts from the entertainment game industry about their understanding of and dealing with realism concerning the represented geographical topics. In many cases, the interviewees’ approach to incorporating real-world issues can be regarded as beneficial for their games’ educational potential, and some designers even pursued learning goals. However, we also identified approaches that can result in questionable presentations of real societal issues. We found the most problematic one to be the prioritization of player expectations for the sake of perceived realism. This approach may lead to the depiction of stereotypes and common misconceptions. The results presented in our study may help teachers to prepare reflection on such misrepresentations in class, or designers to become more aware of the educational implications of different forms of game realism

Czauderna, A., Guardiola, E., Lux, J-D., Budke, A. (2021):  How insights into commercial games can improve the design of educational games on complex societal problems. In: Proceedings of the 15th European Conference on Games Based Learning: ECGBL, Academic Conferences and Publishing International, pp. 170-177. doi:
10.34190/GBL.21.119

Many educational games have been criticized for their lack of enticement to players, which is attributed, among other factors, to a low degree of complexity and a limited amount of choices, when compared to entertainment games (Sanford et al., 2015). From the perspective of learning theory, this is insofar problematic as successful processes of learning require player motivation, great agency, and a well-balanced level of complexity, which correspondents and adapts to players’ knowledge and skills (Gee, 2007). We thus assume that educational game design can learn from entertainment games, i.e., must look at them in order to improve educational games when it comes to their allure, their simulation/moderation of complexity, and their enabling of meaningful choices. With this in mind, we conducted a series of studies on commercially successful and critically acclaimed simulation and strategy games such as Cities: Skylines, Civilization VI: Gathering Storm, and Tropico 6 referring to the topics of climate change, urban planning, migration, and/or resource management – from the perspective of geography education. Our research focused on different aspects such as the games’ realism, complexity, geographical topics, facilitation of decision-making, and principles of political education, utilizing 18 game analyses and 8 qualitative interviews with game designers of these games. Based on the results of these studies, the present paper derives seven recommendations for the design of games on complex societal problems that can be used for educational purposes in geography education. Overall, the paper contributes to the greater effort to bridge the gap between entertainment game design and educational game design, thereby facilitating the creation of games that are both motivational and educational.

Designers of digital entertainment games and designers of games for education can learn from each other when it comes to gameplay mechanics, content and mediation techniques that enable a fun and at the same time educational experience for players. The following design guidelines bring together the perspectives of entertainment game industry and educators. Based on a range of studies, they present 11 recommendations to facilitate the design of games on complex social and socio-ecological issues such as climate change, migration, city development and resource conflicts – suitable for any designer who wants to provide an enriching game experience. 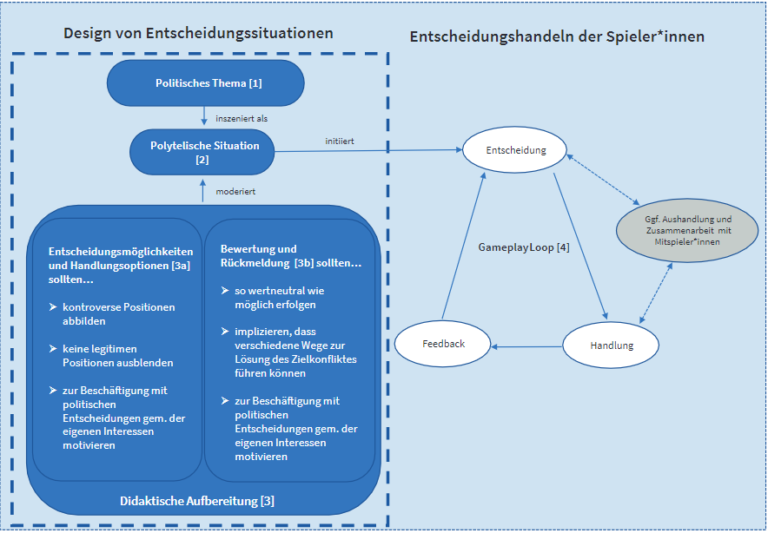 This paper examines how digital strategy and management games that have been initially designed for entertainment can facilitate the practice of dynamic decision-making. Based on a comparative qualitative analysis of 17 games—organized into categories derived from a conceptual model of decision-making design—this article illustrates two ways in which these games may be useful in supporting the learning of dynamic decision-making in educational practice: (1) Players must take over the role of a decider and solve situations in which players must pursue different conflicting goals by making a continuous series of decisions on a variety of actions and measures; (2) three of the features of the games are considered to structure players’ practice of decision-making and foster processes of learning through the curation of possible decisions, the offering of lucid feedback and the modification of time. This article also highlights the games’ shortcomings, from an educational perspective, as players’ decisions are restricted by the numbers of choices they can make within the game, and certain choices are rewarded more than others. An educational application of the games must, therefore, entail a critical reflection of players’ limited choices inside a necessarily biased system.

The current socio-ecological challenges and phenomena that are major topics of geography education, like climate change and migration, are highly complex. Maturity in these contexts requires a networked way of thinking, and a systemic competence that is difficult to develop in geography classes alone. Digital games that simulate complex systems which include the pressing issues of today’s challenges may be a useful supplement to foster systems thinking. In this study, we develop a framework to assess the complexity of in-game systems. A subsequent analysis of a selection of current commercial strategy and simulation games shows how system complexity is designed differently in the various games. Based on these results, we make recommendations for the selection and use of different games in formal and informal learning contexts.